skip to main | skip to sidebar

In the last couple of days, I've managed to paint 3 rebel figures and they've been thoroughly enjoyable!
Pictures will come next week when I've finished some more rebels and properly based them and hopefully some more government forces too!
I might make this project a little broader so it covers the period from 1912 right up until 1938 so I can fight all sorts of mini internal wars including VBCW. Doing this project has drawn me towards other periods I'd not previously thought of doing such as the Spanish Civil War and Operation Sealion because of the cross over of figures (and therefore, money savings!).
These will have to wait however because I'm really getting into this alternate ECW. I currently have regular infantry, naval troops and policemen for my government forces but am severly lacking in the rebel department. The next purchase for my rebel army will be an armoured car to give them some much needed support. I'm thinking of this one from Force of Arms... 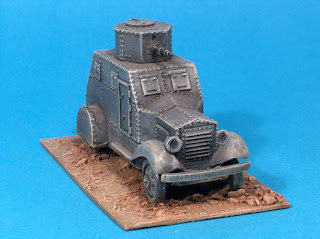 Picture from Great Hall Minis
Posted by Consul at 14:46

I wonder whether that FoA armoured car would be right for your earlier period though. You might be better working with something like a Rolls Royce or Austin armoured car - which I believe were both around in 1914 but could be made earlier if there was a need. Or perhaps something like the armoured truck which Musketeer have for IWI.

I'm really motivated with this time period it seems (more so than the ancients i've been working on!). I'm also aiming to have a skirmish game at Christmas so that's really spurring me on!

You said it yourself, gaming in the early 1900s really restricts me with a lot of things; figures, vehicles, weapons, etc so I'm considering moving to a later period. The battles you would fight would essentially be the same, similar kinds of objectives but would allow you greater flexibility. Or I could still fight this era but use the figures for later ones?

Have you got any pictures of the vehicles you use for these sorts of periods?

It is an interesting period in history with plenty of variety available. I started off with SCW simply because I liked the Anglian figures and expanded in IWI for similar reasons and then VBCW came along!

For IWI vehicles I have some Crossley tenders (which are die cast conversions) and a Musketeer armoured truck that I am in the process of making. I also have a Sloppy Jalopy Austin armoured car (which is proving a nightmare to assemble) too. For SCW I have some other die cast truck conversions, a T26 from Anglian and one of their resin armoured trucks (which I am painting) along with a Force of Arms IZM a/c (assembled but not yet painted). You can find pictures of most of these in my Picasa galleries.